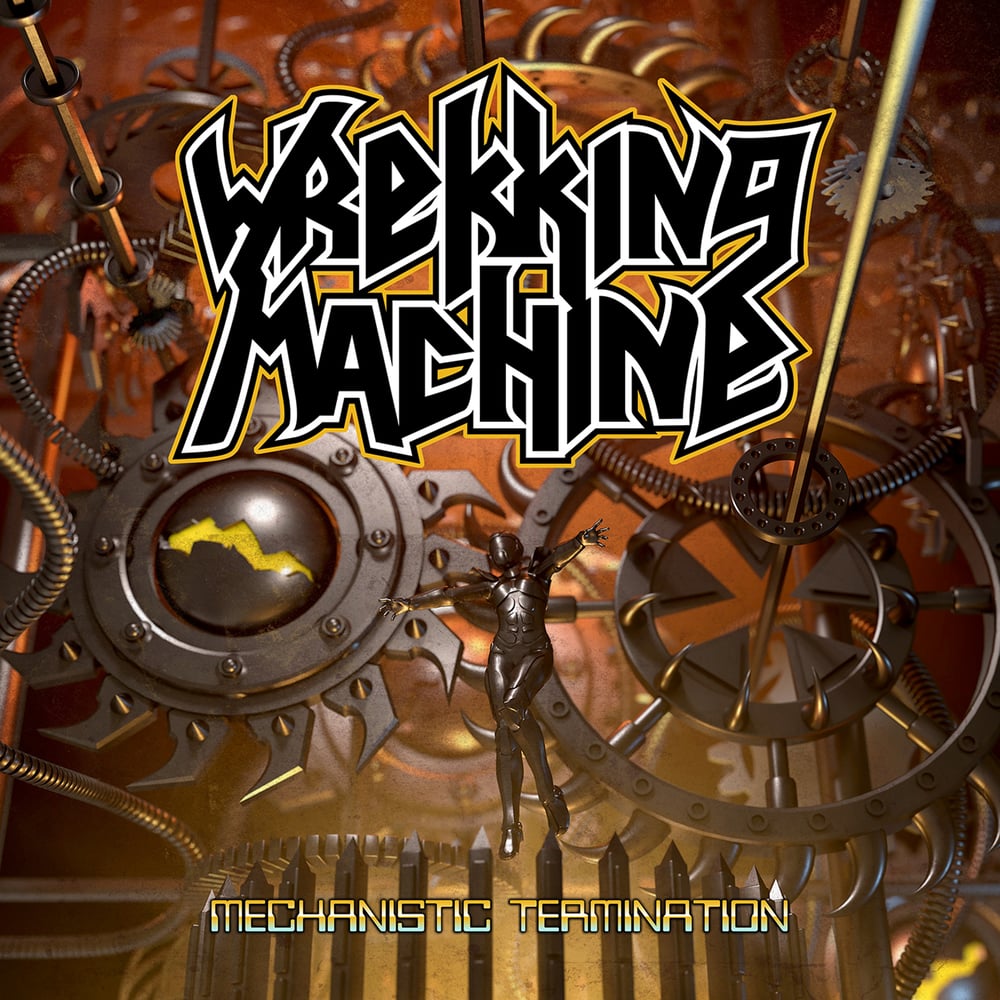 OVERVIEW:
WREKKING MACHINE formed in Santa Cruz, CA during the summer of 1986, and within a year had solidified a stable lineup consisting of Shawn Smith on guitar/vocals, Doug Livingston on guitar, Nick Felczer on bass, and Sam "Bam" Adato behind the kit. The group recorded the I Am Born demo in June of 1987 at Harbor Records in Santa Cruz, CA—four songs of aggressive thrash that retained a classic heavy metal influence—before Scott Sargeant joined up on second guitar, allowing Shawn to focus solely on fronting the band. An unreleased four-track demo, Fatal Mistake, followed; and in March of 1988, the Shut Your Mouth and Let Us Play!! rehearsal demo was circulated, featuring 14 tracks—including a cover of Nuclear Assault's "Hang the Pope." Later that same year, the two-song Merge!! demo was tracked once again at Harbor Records—the material starting to reveal a harder-edged sound with a hint more sarcastic humor.

In early-1989, Nick and Doug relocated to San Francisco to be closer to the high-profile Bay Area thrash scene, and it was time for the next WREKKING MACHINE demo, Somethin' Happened, in July. Recorded at Telluride Studios in Palo Alto, CA, the tunes showcased signs of the more technical direction the band would fully develop in the years to come. Somethin' Happened was heavily promoted with a massive amount of shows alongside such acts as King Diamond, Manowar, Candlemass, Annihilator, Sacred Reich, M.O.D., Dark Angel, Defiance, Heathen, Atrophy, and many others.

In 1991, Scott Sargeant left to join Lääz Rockit, and was eventually replaced by new guitarist Mike Wells as WREKKING MACHINE began working on a nine-song full-length at Old West Studios in San Francisco. Tentatively titled Hear Me Now, the album was originally due out by the end of 1991 on Resurrection Music in the U.S. and Demolition Records in Europe. Though performing on the bulk of the tracks, Doug Livingston had also exited the group before the material was ultimately released under the name of Mechanistic Termination—first on limited edition cassette in 1992, before seeing a proper CD release through Mausoleum Records the following year—boasting tighter production that allowed the crunchy rhythms and technical flourishes to truly shine.

Backed by Mausoleum, the disc started to gain traction on niche radio programs and garnered favorable reviews from Kerrang!, Metal Forces, etc. WREKKING MACHINE continued to play shows, and Mechanistic Termination was re-released on CD by Mausoleum Records/BMG Distribution in 1995, but after a disappointing Canadian tour that illustrated the changing face of the industry's attitude toward metal, the band simply fell apart.

Now, almost 25 years later, Divebomb Records is excited to finally present this expanded, double-disc edition of Mechanistic Termination. Fully remastered by Jamie King at The Basement Recording, the core album is bolstered by all of WREKKING MACHINE's studio demos—Something Happened, Merge!!, Fatal Mistake, and I Am Born—for a total of 22 songs and over 96 minutes of top-notch thrash. As always, the discs are housed alongside a jam-packed booklet full of ephemera and an extensive interview with the band. For the fans, by the fans!