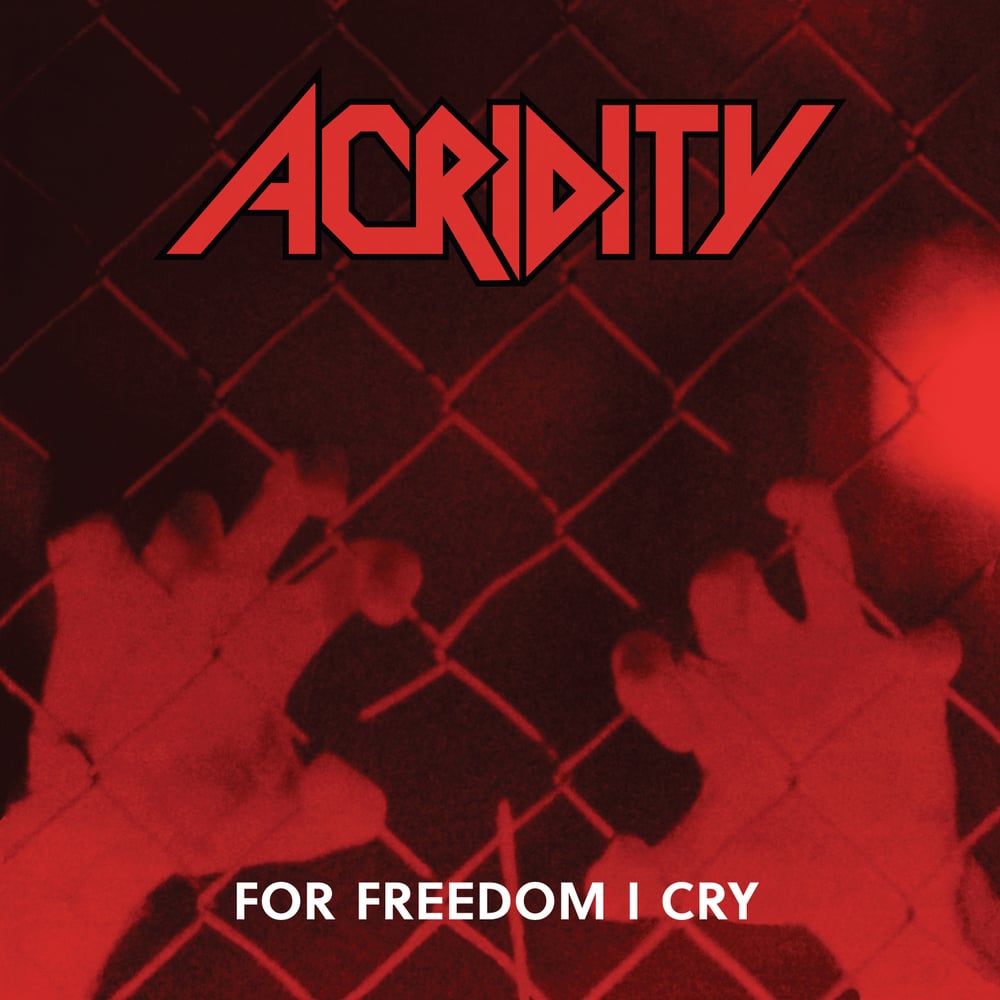 OVERVIEW:
ACRIDITY got its start in Victoria, TX in 1986, and by the end of the year had solidified a still-teenaged lineup consisting of guitarists Anthony Pedone and Mel Langenberg, Mark Cox (bass), Mark Soto (drums), and frontman Darin Carroll. Combining passions for no-frills, heavy-or-die thrash as well as the sounds of the NWOBHM, the group set out to manifest its own brand of complicated thrash riffs, melodic overtones, and extended song structures—developed in parallel with their influences such as Metallica, Testament, Kreator, and Destruction.

After issuing the four-song Countdown to Terror demo in February of 1988, ACRIDITY entered Beck's Studios in Corpus Christi, TX—where Devastation had recorded Violent Termination—in December of 1989 to lay down four new songs for subsequent demo, For Freedom I Cry. An exclusive track, "Whisper of Reality," followed in 1990 on the Voices of a Red God compilation, appearing alongside other Texas greats such as Deadhorse and The Morbid (i.e. Morbid Scream). At last, 1991 saw the release of the For Freedom I Cry full-length—essentially a combination of both demos (sans "No Mercy") with the addition of two all-new cuts—on CD and LP through Dutch label Prophecy.

By the time the album hit the streets, however, ACRIDITY as a hard-charging thrash unit was more or less finished. Despite exploring the notion of relocating to San Francisco to be managed by Debbie Abono (Possessed, Exodus, etc.)—not to mention a bit of interest from Megaforce Records—the band had landed in Austin, TX. Combined with the era's shifting musical landscape and lineup changes that included a keyboard player and hired-gun studio singer, writing became influenced by acts such as Faith No More and Mr. Bungle. ACRIDITY morphed into a different outfit called The Gaia Foundation, and by 1993 it was all over.

Since that time, For Freedom I Cry has become an extremely sought-after collectible—routinely fetching well over $100 on CD—so nearly three decades later, Divebomb Records is delighted to collect ACRIDITY's complete discography amidst this deluxe reissue of For Freedom I Cry. Remastered by Jamie King at The Basement Recording, the disc includes a 20-page booklet with photos, flyers, lyrics, and a retrospective interview with the band. For the fans, by the fans!

FOR FANS OF:
METALLICA, DESTRUCTION, EXODUS, KREATOR and SLAYER

TRACK LIST:
1. Beyond
2. Lethal Idol (Paradise Of Pain)
3. For Freedom I Cry
4. Countdown To Terror
5. Denied Right
6. The Verdict
7. Exist In Misery
8. Nothing Held Sacred
9. Vigilante