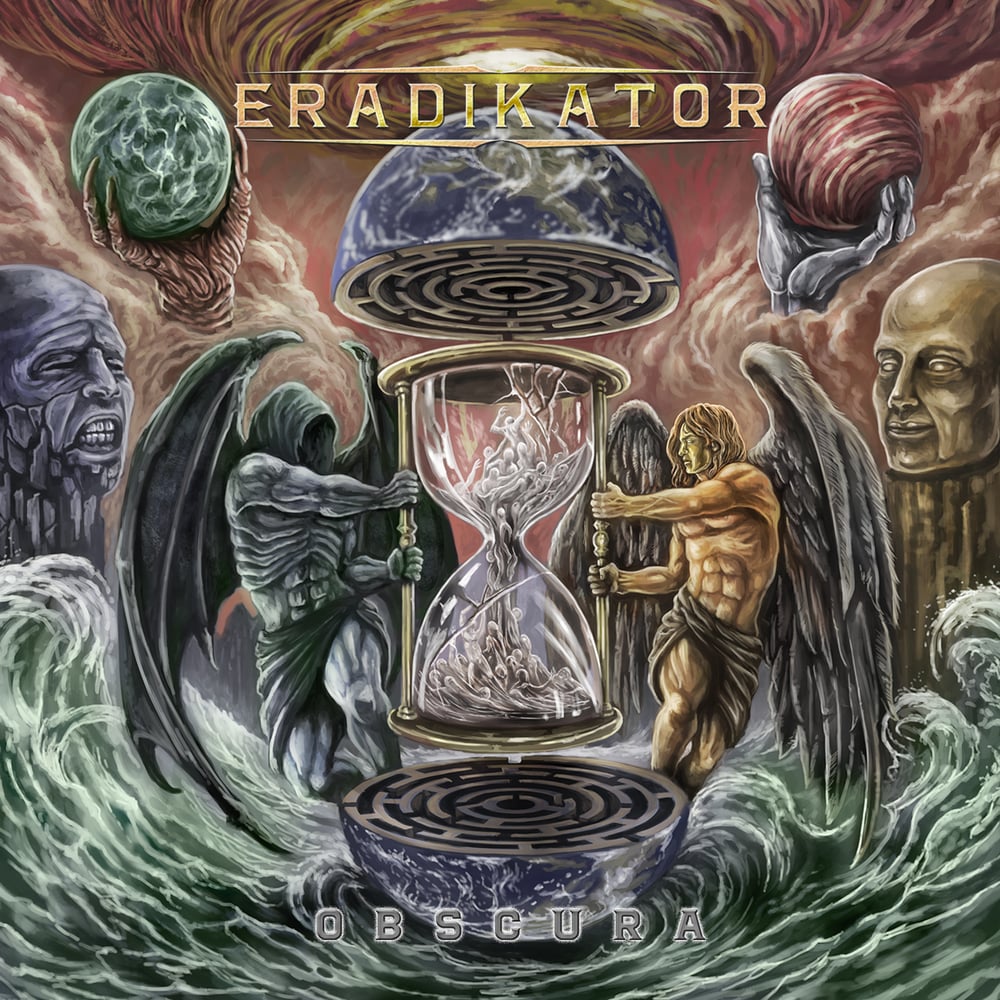 OVERVIEW:
Hailing from the birthplace of heavy metal—Birmingham, England—ERADIKATOR are a four-piece thrash outfit that initially set out to create face-melting, ear-shredding metal that would make even the most hardened ears hemorrhage liquid steel. Back with Divebomb Records for their third consecutive release—following Dystopia (2013) and Edge of Humanity (2015)—the U.K. quartet has, however, broadened its palette and focused on masterfully crafted songwriting with forthcoming nine-song full-length, Obscura.

Speaking of the new album, guitarist Andy MacNevin comments, "Obscura is about addressing the darker side of the human psyche. It's a concept album that deals with the different stages of grief hand how they impact the mind, looking at how we manage those feelings and ultimately try to move forward whilst not forgetting that which we have lost."

Recorded once more with producer Russ Russell (NAPALM DEATH, AT THE GATES, EVILE) at The Parlour Recording Studio, Obscura's 47-minute journey demonstrates a compositional raising-of-the-bar that one might parallel to MEGADETH circa Countdown to Extinction—a more streamlined and immediately memorable approach that doesn't stray too far from its roots. From the undeniable hooks of opener "Nightmare Dawning," ERADIKATOR's first-rate brand of meaty-yet-melodic thrash grows increasingly diverse—take, for example, the echoes of acts such as MASTODON or GOJIRA in "Hourglass," or the unanticipatedly bluesy intro to the epic "I Want to Believe."

Further elaborating on Obscura's lyrical direction, bassist/vocalist Pat Cox adds, "It's about the sense of loss we find within ourselves and the propensity to dwell on and be blinded by grief—following the journey through the sorrow and darkness, reaching the end, and coming out the other side scarred but wiser."

"Growth" and "maturity" are all too often subtle signs of decline with regard to the heavy metal landscape, but ERADIKATOR has executed this impressively ambitious evolution to utter perfection, and Obscura is sure to remain a benchmark album amidst the group's growing discography.